We live in a world where pre-cooked meals are plentiful and snacks aren’t something homemade, they’re store bought. As you look for food and the grocery store, here are some sodium packed foods to avoid: 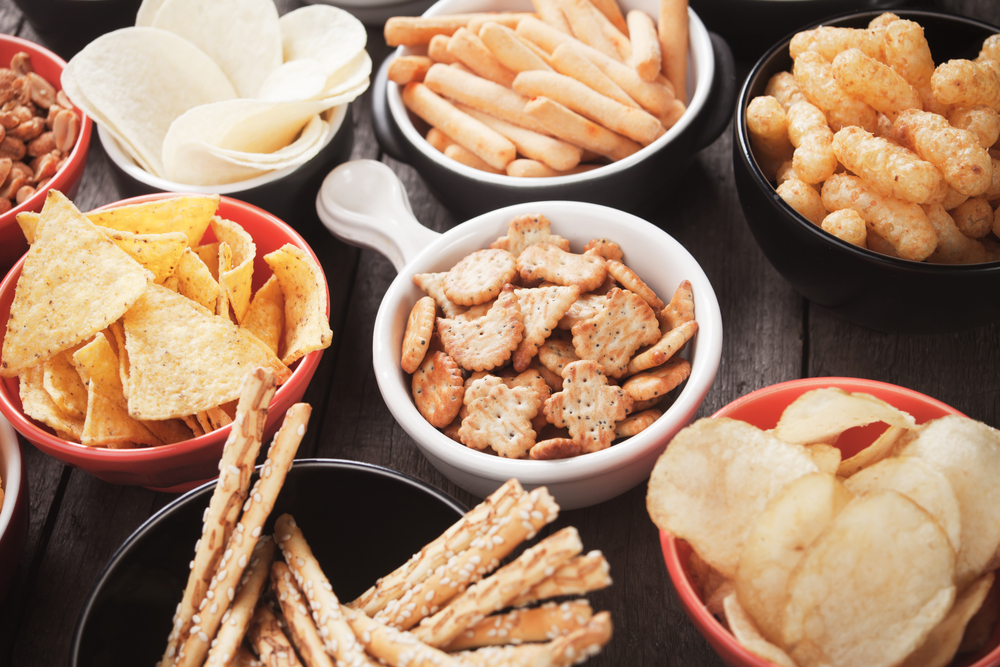 That’s right, frozen meals are one of the top sodium packed foods to avoid. Even ones that say “less sodium” can still contain more than 25% of your daily sodium intake of 2,400 mg.

Frozen meals use salt as a preservative to make sure the food stays usable until it gets eaten. For example, Stouffer’s makes individual meals that look appetizing, simple, and healthy. However, a small meal of baked chicken and mashed potatoes boasts 760 mg of sodium.

These meals look appealing because they are low calorie and say “no preservatives”. Be wary of frozen meals and their sodium content.

Most people are aware that chips are filled with salt. It’s generally what people crave when they want something a little salty. Ruffles Sour Cream and Onion flavored chips pack in 320 mg of sodium in only 11 chips. And let’s be honest, who stops at 11 chips?

Many turn to pretzels as an alternative (which is slightly better) but they can be just as sodium filled. In 17 pretzels, there can be as much as 450 mg of sodium.

Another easy food and snack to grab is a pack of salted nuts. You can pack them in a bag or grab an individual pack on-the-go. While peanuts, almonds, and cashews are high in healthy fats and proteins, their nutritional value drops when they are cooked in oils and salts.

In a to-go pack of Planter’s Salted Peanuts there is about 210 mg of sodium. It may not sound like a lot but that is 10% of your intake if you’re on a 2,000 calorie diet. If you’re eating less, than it accounts for more.

Try to opt for unsalted nuts which will not have any added sodium and are overall healthier for you.

Lunch meat like turkey will have added sodium to it in order to keep it preserved for longer. For example, 6 slices of Oscar Mayer’s Deli Fresh Honey Roasted Turkey Breast has 470 mg of sodium in it and is one of the sodium packed foods you want to avoid.
If you add the bread you eat with it and the sodium that comes in that, you are eating one salty sandwich.

Lunch meat straight from your store’s deli will be fresher and have less sodium in it. There are usually options that even allow to choose low sodium meats. The price may be a little more, but it is worth it.

Don’t worry, not all breakfast cereals are filled with sodium, but some are. Some may even surprise you.

Kellogg’s Raisin Bran is one that tops the list for marketed “healthy” cereals that are rich in sodium. Raisin Bran is a great source of fiber, but if you’re watching the salt, you may want to choose Cheerios.

In one cup of Raisin Bran there are 390 mg of sodium. One cup is barely enough to fill your bowl. Be careful on choosing cereals, even though they may seem like a healthier option.

Salty foods are tempting and can sometimes taste better (let’s be honest). However, getting too much sodium on a daily basis can lead to high blood pressure and more serious risks like heart disease.

Make sure you are reading nutrition labels, even when something says it’s “lean” or “healthy”. While it may be healthier in some aspects, it may be unhealthier in other ways. There are plenty of healthy option out there for you to enjoy!